Transparency is not binary

For some months now (starting the 13 April 2021) I've been giving a talk on the limits of transparency, inspired by both my experiences with and observations of the Global Partnership for AI (I'm one of Germany's original 9 nominees) and Google (both the recent Stochastic Parrots / Timnit Gebru / M Mitchell problem, and of course ATEAC.)

What I've said is that there are at least three limits to the extent of transparency:

One consequence of transparency having limits like these is that transparency is not necessarily binary. Obviously some things can be completely untransparent (opaque), for example if you burn or delete records of how something was built. But generally transparency relates not only to an artefact, but to who is trying to comprehend it.
How much time and effort you can put into understanding a system, or communicating a system, will vary based on what your goals and resources are. We've long known that there will need to be different kinds of transparency for different audiences. But in computer science, we've for even longer known that every time you replicate information, you set yourself up for future failure, because someone will update the thing momentarily important (e.g. the software code) and forget to update the other copies (e.g. the documentation.) This is why for a long time people talked about "self documenting code." On the one hand, having only one version was the only way to be sure all versions agreed, but on the other hand, code is never really entirely self documenting, that is, how and why it was written will never be transparent to everyone. Nevertheless, one way we can facilitate transparency is to ensure that the documents that support it are grounded in the actual system they document. For example, that they link directly to the source software code they are abstracting over. This can work even if not everyone is allowed to see the code or data, so long as there are trusted individuals such as government regulators to check that the links really do work.
More recently, I've been thinking about how to companies like Facebook or Huawei can provide transparency, when (to a first approximation) no one would believe them even if they did. Well, almost no one. It turns out Facebook has solved this problem in some circles just by hiring or funding outstanding and outspoken researchers who show all their work and data, and basically the external academic communities of researchers who know these Facebook-funded scientists have a reasonable amount of faith in what they are doing. Though part of the reason this works is that the researchers still in academia are also are now even more vigilant in reviewing the Facebook researchers' results, and presumably the Facebook-associated researchers are now even more careful to follow correct processes and fully document their work.
My conclusions from all this pondering is that transparency requires two things:
These two things are interdependent. For example, good public education can make the first problem easier. Or a system may be transparent to experts but not to lay people.
Some governments and other agencies who are not truly interested in transparency but rather in less fettered exercise of power are trying to direct focus only on the second, population aspect. They come and ask people like me how to make people trust AI.
No one should trust AI.  Similarly, the task of producing transparency is not (only) to ensure that systems appear transparent, but to ensure that they actually are. We need to work hard to make sure that systems actually are transparent, which means that accountability can be maintained across those systems  use. We'll know we've achieved that if when things go wrong, we can tell who is at fault,
Once we've done all this, it's a lot more likely that people will trust the system, because so many people would be involved in the process of building and regulating that system. This is essential: trust comes from between people, from their experience of each other. This goes back to that second constraint on transparency, polarisation. If people know someone who knows someone who works in software, AI, regulation, or whatever process is involved, they can call up and ask someone they know whether they should believe a story they see in a paper or on social media. That is much more likely to happen when we have higher social mobility, which correlates with lower economic inequality and lower political polarisation.
So transparency is not a binary. It's an extent – it's the extent to which a population can understand a system. And that extent has both social and technical components. 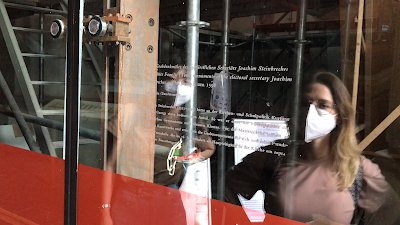 transparency and documentation on a repair process in Berlin

Science failing to find correlations between social media use and polarisation

There is this weirdly dominant narrative that social media drives political polarisation. It's not just that I have another good explanation for polarisation , it's also that this scapegoats what might actually be a useful technology, and/or confuses the real problems of social media manipulation and disinformation. I run across these papers occasionally but have been having trouble keeping track of everything, so this is a perpetually under-construction blog post, which goes to show that I've lost control of my Website because in the old days I'd just be making a Webpage. https://www.pnas.org/content/117/6/2761 How social network sites and other online intermediaries increase exposure to news, Michael Scharkow, Frank Mangold, Sebastian Stier, and Johannes Breuer Shared Reality: From Sharing-Is-Believing to Merging Minds E. Tory Higgins, Maya Rossignac-Milon, Gerald Echterhoff  https://journals.sagepub.com/doi/10.1177/0963721421992027 Exposure to opposing views on soci