Why I took military funding: The myth of basic research

Why I took military funding

I've been lectured by someone that it's easy to be a purist, and never take military funding.  Yes, it's trivially easy to be a purist.  Why I took the funding was because:
Reason one may seem a knock-down argument, but I couldn't overcome my gut-level pacifist purism with my rationality until I'd thought about reason two.


The myth of basic research

Of course I didn't just decide my moral quandary on my own.  I discussed it with a lot of people, few of whom helped, but one helped though not as she intended.  She said "How could you even think of doing work knowing that something you do might affect where a bomb falls and who lives or dies?" 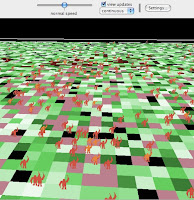 I said, "I work in artificial intelligence and I put all my code open source on line." Aside: computer scientists generally assert this is the most ethical thing to do, especially at MIT where I got my only computer science degree. "I don't know who uses my software.  I may already be affecting who gets bombed.  You can't do something useful without it being possible to use it for good or bad."

My [here anonymous] interlocutor shouted angrily "That's why I study the evolution of language.  It can't be used for anything good or bad!!"

The great irony of this was that the core of the research proposal I was writing for the Air Force Office of Scientific Research on cultural variation was in fact based on my research in the evolution of language, specifically on how the altruistic dissemination of information could be adaptive.  As I've blogged before, basic research is absolutely essential to how universities benefit the nations that support them.

I grew up during the Vietnam war, and that war was a terrible thing, even for Americans.  It cost us not only money but far more lives, both in terms of deaths and in terms of long-term damage to soldiers, than the current wars, even though it was much shorter.  Nevertheless, that war was far better than the World War(s). Also the period when I grew up was also a wonderful time of hope for both social and technological change**.

Like now I spent a lot of time thinking then. I thought wars were caused by people wanting what others had, and there'd never be peace until the world was equal.  I knew the USA was much richer than most of the world, though I had no idea our GDP was greater than the rest of the world combined.  We were told the USSR was our enemy, and equal threat, so I thought they were as rich as us, but I knew people in other parts of the world lived in huts with mud floors, and assumed that they wanted our cool things.  I realised there were more poor than rich people, and that if everyone was equal (thereby eliminating war) we would all have a lot less than Americans did at present.

Now that I'm a little older I realise that war is a little more complicated than that.  Peace is maintained by the expected cost of attack being higher than the expected benefit got in return, but even those aren't single, simple values. Those values have to be seen as probability distributions over a variety of outcomes.  Whether war appeals is determined by your own current well being and the profile of risk you find acceptable.  For example, where risk is assumed to be normally distributed, then a lot of possible upside risk (good stuff you might get) might get ignored if you can't  possibly afford the downside risk (what you might lose).  But if you are sufficiently wealthy you can absorb a good number of failures, or if you understand that life is long and the average outcome might be in your favour, then you might do something risky.  Also, you may take risk simply if you enjoy gambling and the excitement of pursuing possible wealth and/or power.  Then taking risky pursuits may be how you'd like to spend your life even if you don't really have much shot at your most preferred outcome.

At any rate, what it comes down to to be a collective is to assure the continuation of that collective, which is broadly what is technically called security. Security is also achieved by wealth, information and so forth, but one source of security is ensuring that even for a wide range of risk profiles, people that hold them won't think it's worth damaging your collective.

Does the military-industrial complex exist?  Is there a vicious feedback cycle meaning that a destabilised world gives money to arms merchants who destabilise the world? Oh yes.  Is academia part of that complex? Yes, that too, at least in part.  We contribute to security in all manner of ways, including by increasing wealth, interdependence, and contributing to the understanding of political science.  But we also train employees and generate innovations which contribute to military security. And the complex helps determine which disciplines get how much funding, possibly distorting the necessary, diverse universality of the basic research done in universities.

I took a job in England due in a large part to being unwilling to pursue funding in battlefield robotics, which was the only thing the US was funding in systems AI in 2000-2002, when I was finishing my PhD and doing my postdoc.  I didn't think reducing human involvement in warfare made the world a safer place.  But if I can contribute to the security of both my country and my world by helping us understand how to collaborate, then to be honest I'm not just willing but proud.  And if there are people in military organisations who also recognise the utility of understanding for peace and stability, then I am more than happy to help those people be successful and look good.


** Footnotes, and why I'm an academic

In what must have been 1968 or 1969, when I was 3 or 4, my babysitter came over dressed in a very cool way and told us she wanted to be a hippy, which my younger sister & I decided was a great idea. Unfortunately being no older than four I couldn't discriminate the words "hippy/gypsy" and got entirely the wrong result after my mother asked what we wanted to be the following Halloween.

On a relatedly tangential note, I'm from a very small generation of children who grew up watching the moonshots live on TV and thought being an astronaut when we grew up was just as likely as being a policeman or fireman (but even more exciting and without the word "man" in the name.)

In fact, what reminded me to apply for graduate school after a number of years in industry paying off college loans and dealing with some medical issues was this:  I was walking home along the lakefront in downtown  Chicago from a softball game after work, enjoying a beautiful sunset, and suddenly it just burst into my brain "I'm not an astronaut.  I was going to be an astronaut.  What went wrong?"
academia basic blue-sky research ethics life politics

There is this weirdly dominant narrative that social media drives political polarisation. It's not just that I have another good, published explanation for polarisation  (Science Advances) – it's correlated with economic precarity, and we now have data indicating it may be caused by it as well . Basically, trust is a luxury good, you deploy it when you are not at great risk . But also, I am really worried about the constant scapegoating of what may actually be a useful technology (there are actually also big polarisation message effects in conventional media), and it may be confusing the real problems of social media manipulation and disinformation. Note:  this is a perpetually under-construction blog post (in the old times it would be a Web page). The most interesting, recent articles are actually at the bottom https://www.pnas.org/content/117/6/2761 How social network sites and other online intermediaries increase exposure to news, Michael Scharkow, Frank Mangold, Sebastian