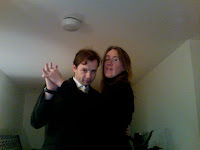 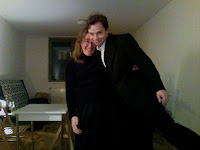 Will was sick last night so we didn't get much sleep, but we think it was just something he ate. Now we are looking forward to going out into the city for New Year's Eve, which is called Silvester here (apparently after a fourth century pope who started the celebrations.

I have heard that at new years they ring the bells in the cathedral and then everyone waltzes! I've also heard this gets shown on TV around the world. So see if you can spot us -- we plan to be in Stephansplatz.